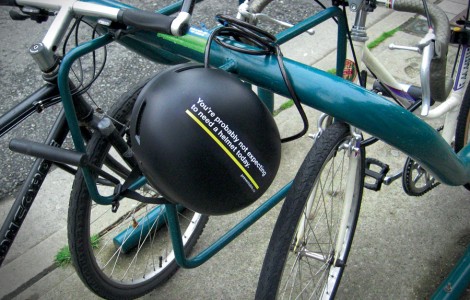 Preventable tried something a little unorthodox to get people thinking about bike helmet use. We descended on 20 locations around Vancouver and left branded bike helmets with a thought-provoking message, hanging from bike racks, where cyclists would be most likely to see them.

Cyclists come up with lots of excuses for not wearing a helmet. “Helmets mess up my hair, ” or “I just forgot to wear it” are some of the common ones. But that fact is that head injuries are the number one cause of serious injury and death to kids on bicycles. According to Parachute Canada, the most severe injuries involve the head and brain and even seemingly minor head injuries may cause permanent brain damage. What’s more, 8% of all cycling-related injuries to children result in a brain injury. But it’s not just kids that are at risk. Without a helmet, adult cyclists are susceptible to head injuries too.

What can we do? Well, the answer could be as simple as changing our attitudes about bike helmets. Parachute says that bike helmets can prevent up to 88% of brain injuries when used properly. So let’s think before we get on a bike. Putting on a helmet could make all the difference.